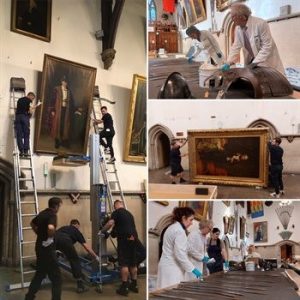 A unique collection of paintings, military colours, and artefacts, including arms and armour from the Royal Armouries has been expertly removed from the Maison Dieu for conservation ahead of the £9m Lottery restoration of Dover’s 800-year-old Town Hall.

The Royal Armouries collection at the Maison Dieu includes 325 items, including firearms, bayonets, pole arms, armour, and swords, with the earliest dating from the English Civil War.  Other items of interest include a pikeman’s breastplate and tassets, and pikes, some of which are 16-18 feet (approximately 5 metres) long!

Once removed from the walls of the Stone Hall, the arms and armour were cleaned, catalogued, and stored.  They will be returned to the Maison Dieu once the restoration is complete in 2024.

Laura Bell, Director of Collections at the Royal Armouries, said: “The removal of over three hundred objects has been a huge undertaking for the Royal Armouries. As custodians of the national collection of arms and armour, including these items on loan at Maison Dieu, our team has worked diligently to ensure this exciting restoration project can progress. We look forward to installing the objects so they can go on display again to the public at the newly transformed Town Hall.”

Removing the historic treasures from the Maison Dieu has been a delicate operation, no more so than for the fine collection of oil paintings, including the last official portrait of Sir Winston Churchill painted in 1955 by Bernard Hailstone.

Specialists in fine art logistics, Constantine, took down a total of 18 large portraits adorning the north and east walls of the Stone Hall.  The oldest painting is a 17th century portrait of King William III (William of Orange) by the Dutch artist, Willem Wissing.

Laurence Burley, Technical Manager at Constantine, said: “Deinstalling and packing the paintings at Maison Dieu was an exciting project. Considering they were displayed at a high level for a long period of time there were lots of unknowns such as their stability, condition and weight. We treated each painting with the utmost care and attention and look forward to seeing them back up on display in the future.”

Cllr Oliver Richardson, Dover District Council’s cabinet member for corporate property, said: “Moving the objects displayed in the Stone Hall of the Maison Dieu has been just one of the complex tasks that needed to be done. The museum team have checked, recorded and wrapped thousands of objects that form part of the Dover Collections.

“The paintings and armour in the Stone Hall posed a particular challenge given the size of many of the objects, but it’s great to be able to see some of the treasures of the Maison Dieu in more detail.”