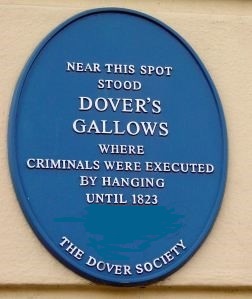 The 10th of the Millennium plaques is at the Eagle Hotel on the corner of Tower Hamlets Road and London Road and was unveiled in September 2002.

From ancient times Dover had full authority to convict and sentence, including execution, of all criminals with the Mayor passing the sentences. As public hanging became the preferred punishment wooden gallows in towns became common sight.

Alexander John Spence was the last Dovorian to be hanged here on Friday 9th August 1822. He would have been 22 the following day. One of a group of smugglers he was found guilty of shooting, but not killing, Lieutenant Philip Graham, a Preventative Coastal Blockade Officer while trying to avoid arrest and sentenced to death by hanging.

Spence was held in the prison at Gaol Lane, off Market Square. On the Friday morning of his execution, after a ‘hearty breakfast’, he was visited by Rev. John Maule of St Mary’s Church then his sisters.

He left the goal in an open horse drawn cart, hired for 10/- [50p] from Worthington’s stables, with his coffin, and Rev. Maule praying, beside him. The executioner, carrying the rope, sat at the front with the driver. Spence was taken along Biggin Street via Charlton High Road to Black Horse Lane and the gallows. The Mayor, Henshaw Latham, and town dignitaries travelled in covered carriages behind followed by a large crowd with Spence, in good heart, waving and bowing as he passed by. 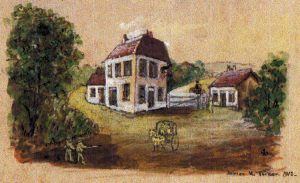 On his arrival, standing by the gallows, was Lieutenant Graham and his colleagues. The hangman swung the rope over the gallows, put the hood over the standing Spence’s head followed by the noose. Before the cart could be driven away, Spence slipped or threw himself off and struggled very hard and slowly died. After hanging for the usual time his body was cut down and buried in St Mary’s Churchyard by his relatives.

In 1826, at Maidstone, Lieutenant Graham was convicted of intent to provoke the 6th Earl of Harborough into fighting a duel. He was sentenced to four months in Marshlsea prison, London and the loss of his job.

The dubious distinction of being the last person to be hung at the Dover gallows, in 1823, was of a young man from Margate convicted of robbery.

In August 1868, Dovorian Thomas Wells, a 19-year-old railway carriage cleaner was the first person to be convicted and hung, at Maidstone Prison, after public executions were abolished.

A full article on Lieutenant Graham and the Last Public Execution of a Dovorian by Lorraine Sencicle can be found on the Dover Historian Website: https://doverhistorian.com/2014/03/02/lieutenant-graham-and-the-last-public-execution-of-a-dovorian/